Not only is Greater Waynesboro located near the numerous natural attractions and hiking trails of the Shenandoah Valley, but the area also has other kinds of trails that showcase mural arts, vineyards, and even a tunnel. Waynesboro has a trail for everything. And I love that!

Use this three-day itinerary as your own guide to this gorgeous region of Virginia.

Related post: The 5 Best Scenic Hikes in Virginia for Families

Located 15 miles north of Waynesboro in Augusta County, Grand Caverns is a great place to begin your trip to the region. 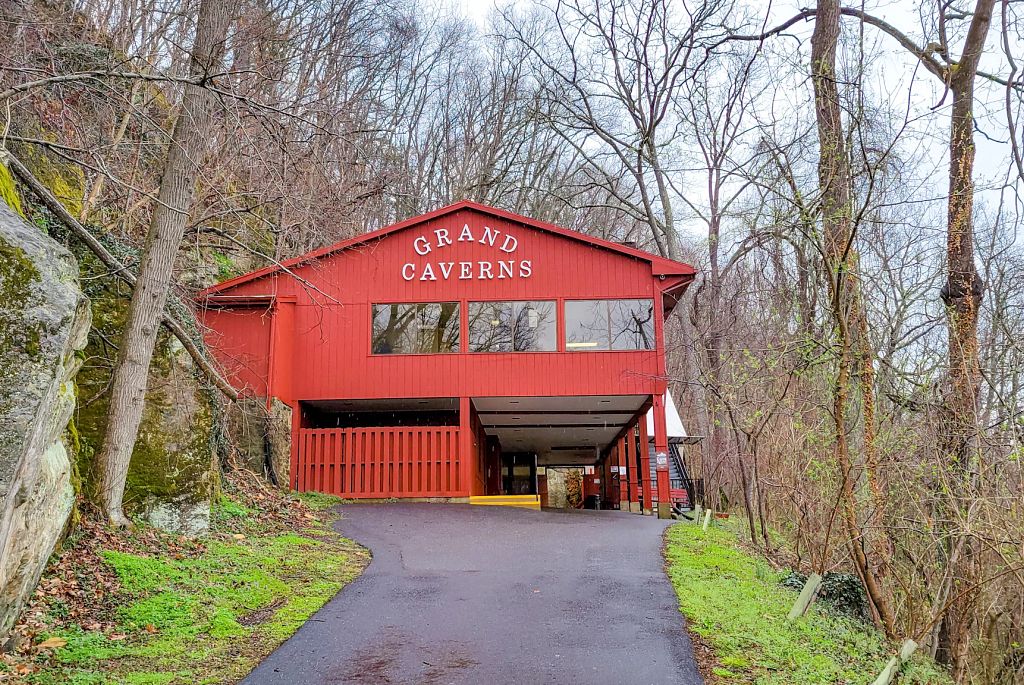 Among the eight caverns in Virginia, Grand Caverns was the first to open and is the nation’s oldest continually operating show cave. Formerly known as Weyers Cave, the cavern opened for tours in 1806. 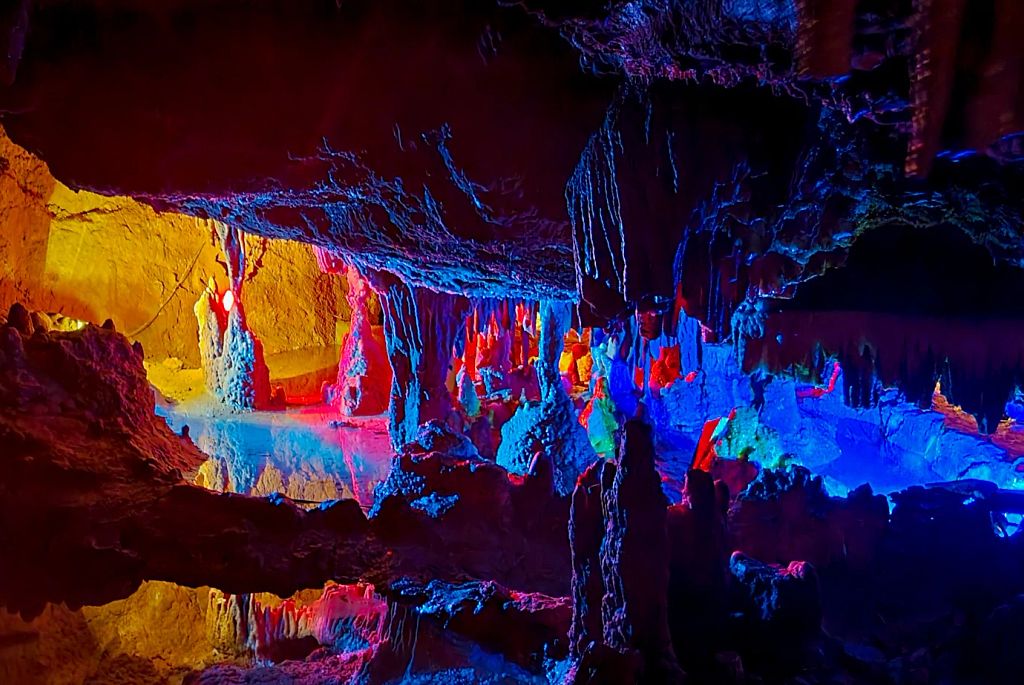 Another unique feature of Grand Caverns that you won’t find in other caverns is a piece of American history. Grand Caverns was visited by both Union and Confederate Civil War troops, who explored the caverns by candlelight. More than 200 of them carved their names in the stone.

Our favorite parts of this impressive National Natural Landmark were the colorful “rainbow room” and the stunning Grand Cathedral Hall, a dramatic 70-foot-high cavern room, the largest on the East Coast.

After touring the caverns, dine at Stable Craft Brewing, a working horse farm and dining venue housed in a modern, repurposed barn. 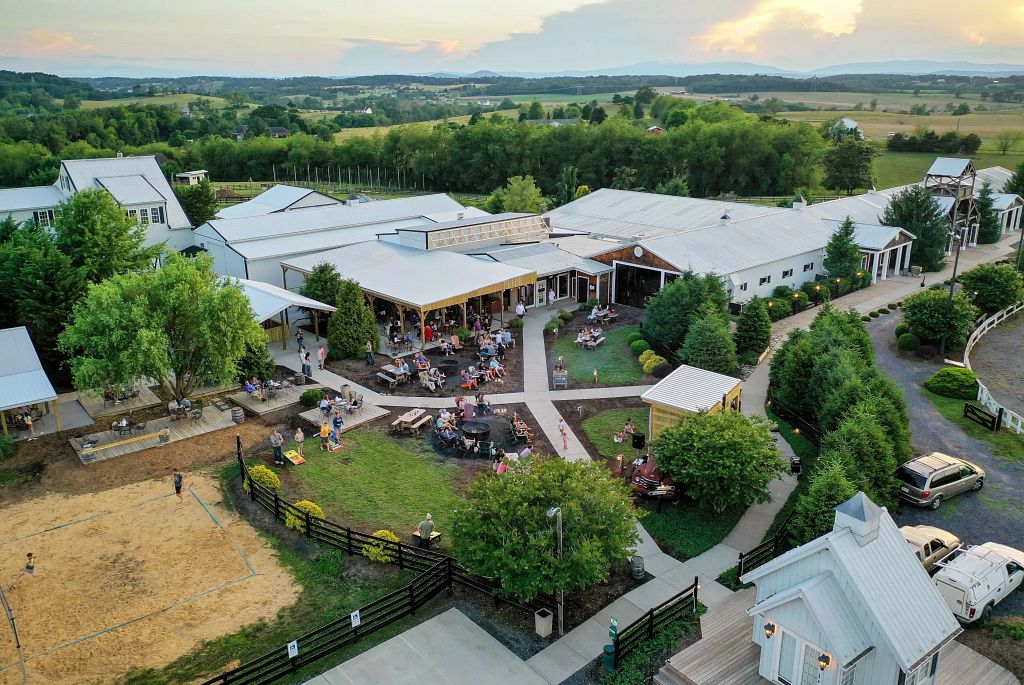 Part of the Shenandoah Beerwerks Trail, the brewery has a large selection of beers on tap as well as five indoor dining areas and two outdoor patios. Meal options include a mix Southern and hops-inspired fare, such as vegan sweet potato “steaks,” smoked pork and grits, and coffee barrel-aged “beeramisu.” Kids will love the signature hot chocolate no matter the season!

Nearby Barren Ridge Vineyards is also worth a visit as well as the wonderful wineries, cideries, and breweries of the Nelson 151 Craft Beverage Trail.

It is always intriguing when abandoned relics from the past are revived through innovative adaptive use projects, and that’s exactly what a regional public-private partnership of county and community leaders achieved with the reopening of the Claudius Crozet Blue Ridge Tunnel for public use in November 2020. 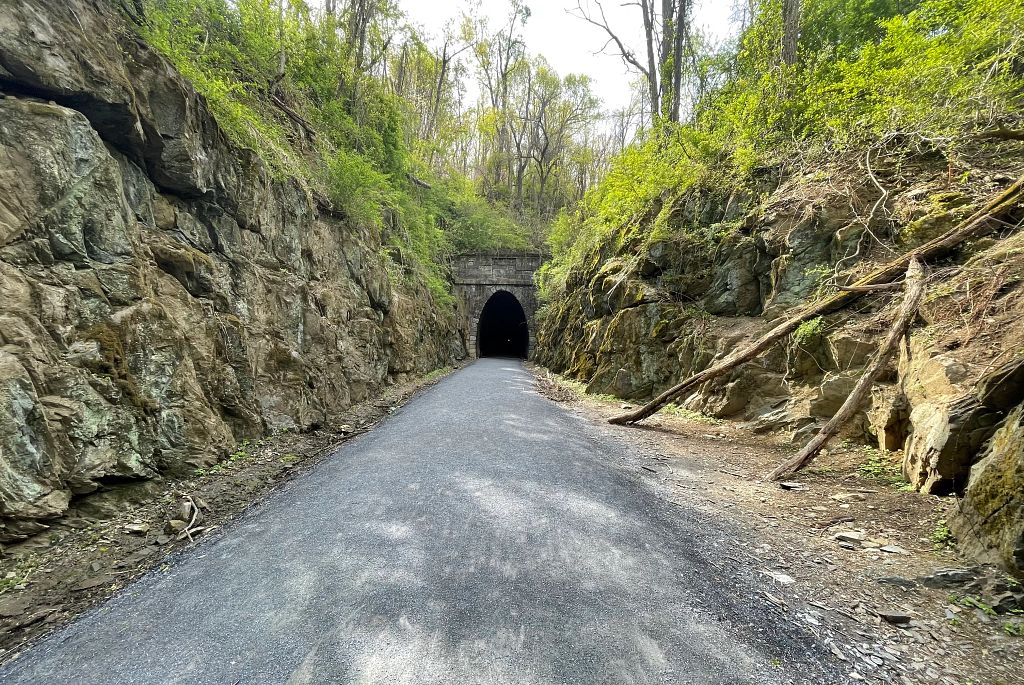 Designed by French engineer Claudius Crozet and built with labor from Irish immigrants and enslaved people, the Claudius Crozet Tunnel was originally funded by the state of Virginia as the first rail link between the Chesapeake Bay watershed and the Ohio River Valley.

At the time of its initial opening on April 13, 1858, it was the longest railroad tunnel in the world at approximately one mile long.

Visiting the tunnel is an adventure. The up-and-down 2.25-mile trail to access the tunnel goes through a mossy forest adjacent to a stream. It’s a great short hike for families and those looking for a moderate walk.

Once inside the tunnel, temperatures average about 50 degrees year-round, so wearing a jacket is highly recommended. And since there’s no artificial lighting inside the tunnel, it’s important to bring a flashlight, or you won’t get very far!

The cave’s dark and cool conditions only added to my daughters’ intrigue and interest in the trail, and at times, we could feel cool droplets of water seeping through the bricks. 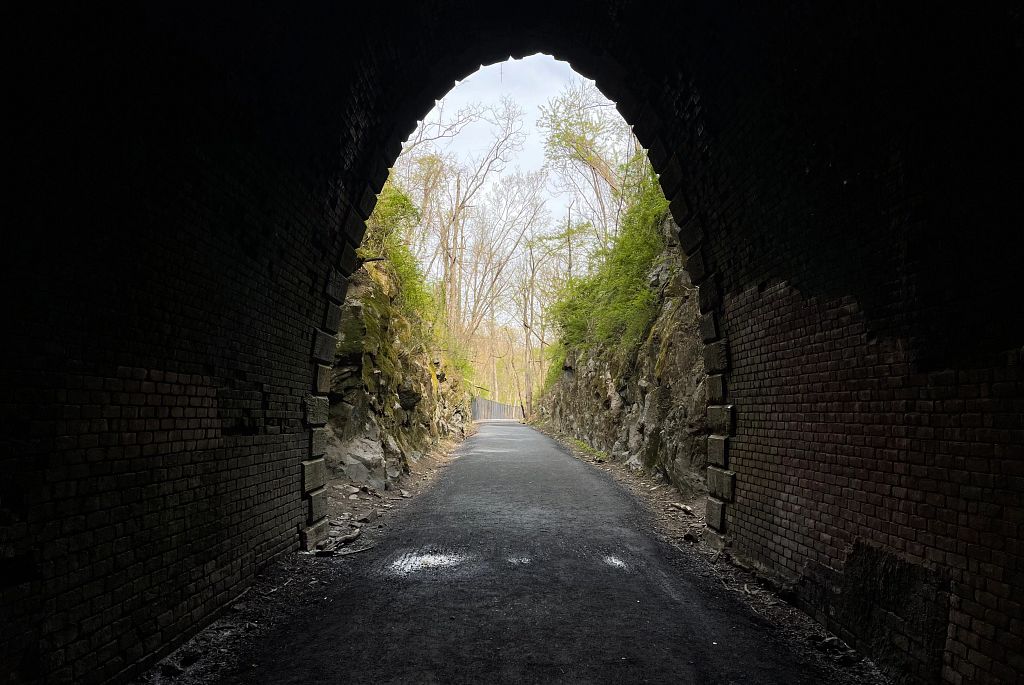 After a fun hike through the tunnel, head to Crozet to grab lunch at Green House Coffee, a charming, green-painted coffee shop with delicious food. Though closed for indoor dining, the coffee shop does have a small outdoor dining area. During lunchtime, the place gets very busy with customers driving there to pick up lunch, dine on the patio, or eat in their cars.

After lunch, take a leisurely stroll along the 0.6-mile family-friendly Upper Lake Loop trail at Mint Springs Valley Park. During the summer months, the Upper Lake is a popular place for swimming, with part of the lake transformed into a beach.

Drive a portion of the beautiful Skyline Drive of Shenandoah National Park and stop at McCormick Gap Overlook or Calf Mountain Overlook for scenic views. Visit Blackrock Summit, an easy one-mile loop trail that is part of the Kids in Parks TRACK Trail program. 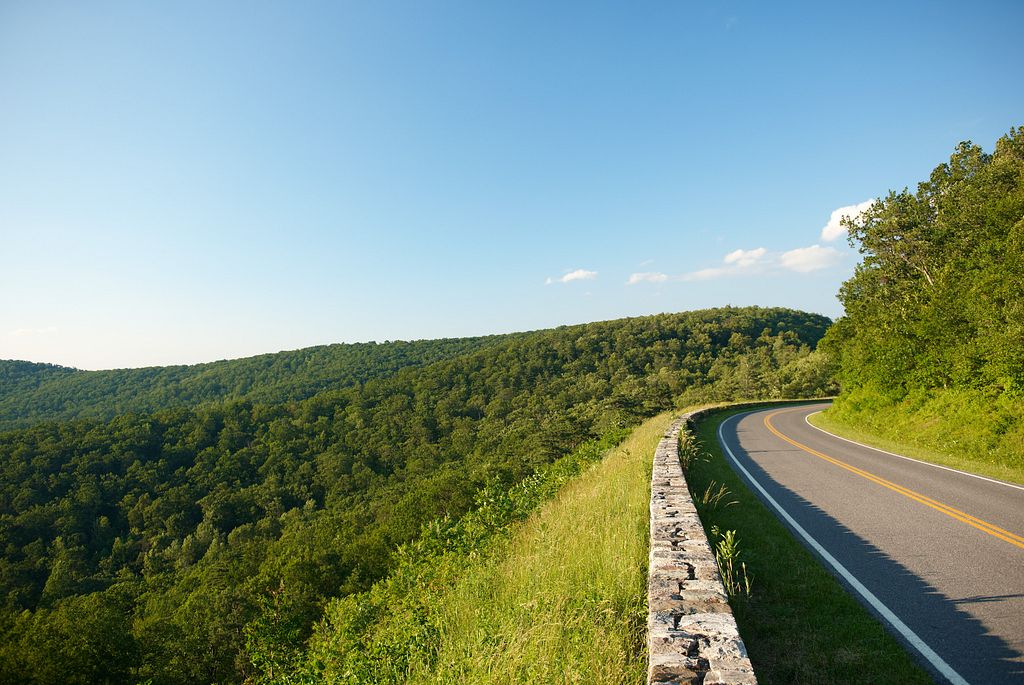 After exiting Shenandoah National Park, delight your taste buds with local, organic kombucha from Blue Ridge Bucha, which has refreshing flavors such as Organic Ginger, Elderflower Sunrise, and Wild Pear.

For dinner, head to The Fishin’ Pig Waynesboro for a selection of delicious barbecue and Southern cuisine. The restaurant features live music during warmer months and has a large outdoor dining area called the “Pig Pen.”

As a lover of street art, I’ve made it a point to visit street art communities all over the world, from Colombia to Chile. These neighborhoods are like outdoor museums that illustrate narratives and histories you won’t find in the mainstream.

Waynesboro’s street art scene has grown significantly in recent years. As a result, the city created the Waynesboro Street Arts Trail and a free interactive scavenger hunt that allows you to learn more about each mural and explore unique parts of the city.

One of our favorite murals was “Father and Child,” painted by Nils Westergard, which displays the lovely bond between a father and daughter. 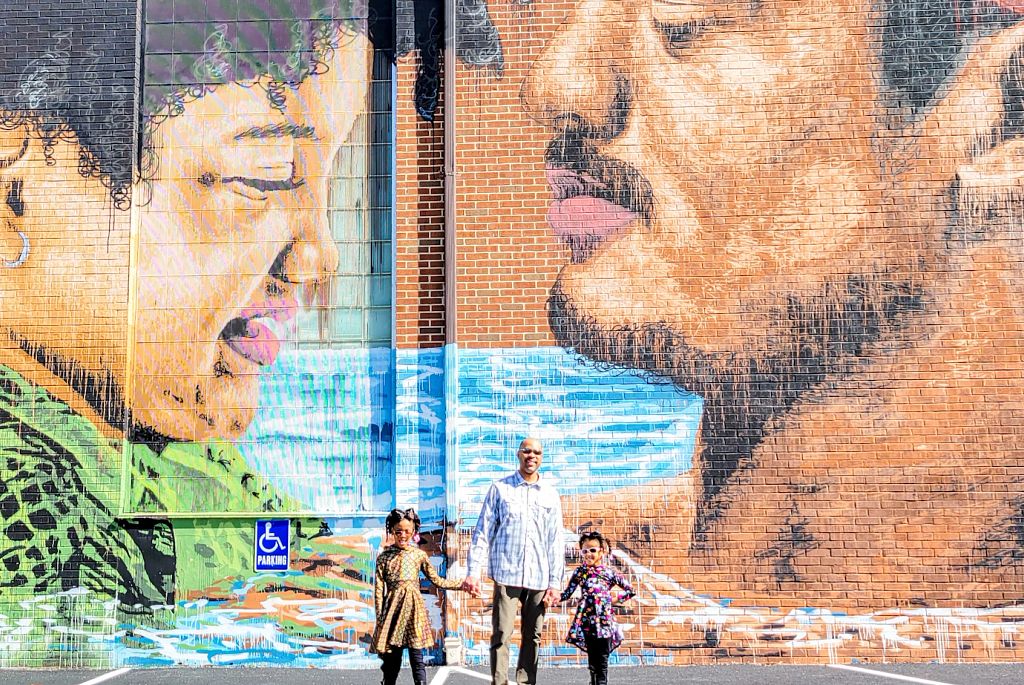 For lunch, head to The River Burger Bar, an upscale burger joint serving allergen-friendly, vegan, and vegetarian fare. The food is delicious! And right across the street, The French Press serves light fare and a variety of beverages and coffees with hip names like “Dirty Chai.”

The South River Greenway is a 1.2-mile trail that runs along the South River in downtown Waynesboro. It has its own stop on the Street Arts Trail at the “LOVEworks” sign in Constitution Park. There is also an arboretum as well as areas with lots of trees, which are great for birdwatching.

The terminus of the greenway is in the Port Republic Road Historic District, also worth a visit. Listed in the National Register of Historic Places, the community was founded by newly freed slaves post-Civil War. Anchoring the community is the historic Shiloh Baptist Church and the Rosenwald Community Center, which houses the Waynesboro African-American Heritage Museum—for visit by appointment only.

After visiting the South River Greenway, make your way back to the center of town and stop by the Waynesboro Heritage Museum, which houses a collection of thousands of local artifacts, historical documents, and furniture.

For dinner, visit Heritage on Main, a five-minute walk from the museum. This family-friendly restaurant serves a variety of beers and beverages as well as American and Italian-style meals that include pasta, seafood, steak, and burgers. 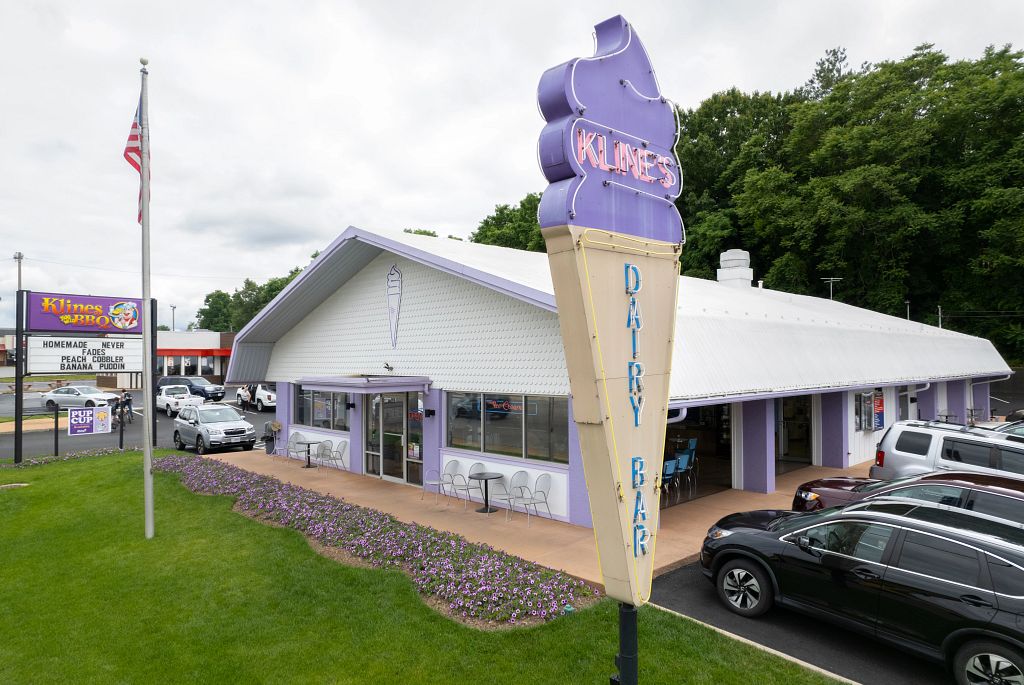 Don’t forget to save room for ice cream from Kline’s Dairy Bar, a local favorite since 1943.

Where to Stay in Waynesboro

Though there are several hotels to choose from in the Waynesboro area, there’s one standout place that will take your stay to the next level.

Iris Inn is a luxury inn with cabins and cottages built with access to nature in mind. Rooms are thoughtfully designed, spacious, and airy with deck-access and multiple large windows that let in natural light. The beds are so soft and cozy that it’s hard to get out of them—until you remember that an exceptional shower experience awaits. 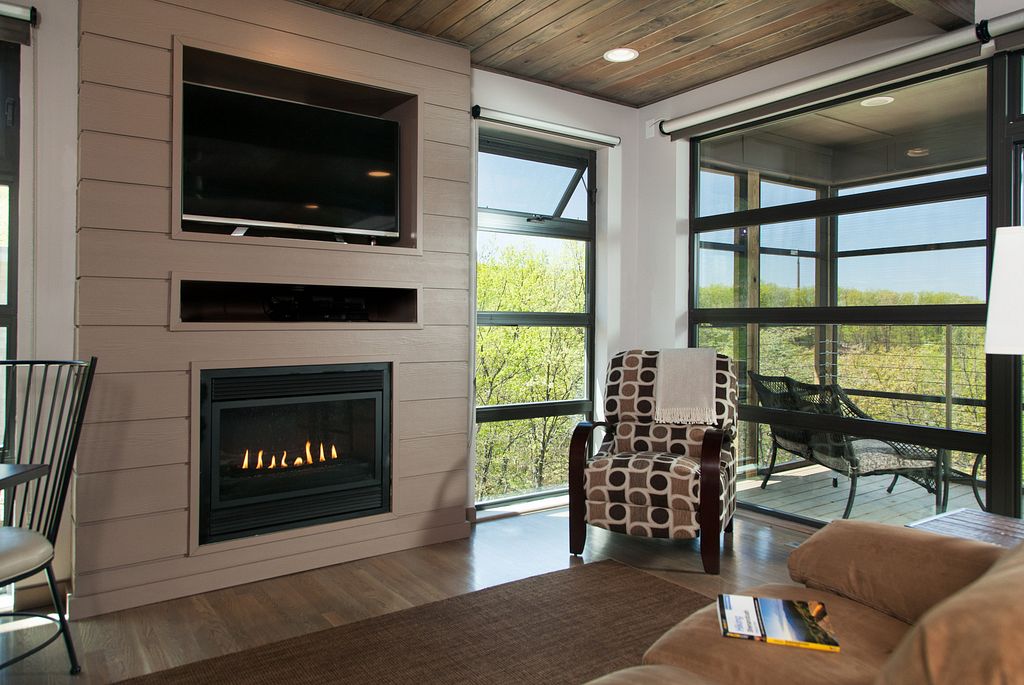 Complimentary bottled water, lather amenities, and chocolate truffles are included in the rate, and you can choose to add breakfast to your stay. We selected the B&B Experience, which comes with a delicious chef-prepared breakfast and a welcome tray of crackers, cheese, grapes, and wine.

Since Skyline Drive is within minutes of the property, the hotel makes a great base for exploring Shenandoah National Park, and at the end of every day, the best thing to do is grab a seat and watch the beautiful sunset with a glass of Virginia wine. 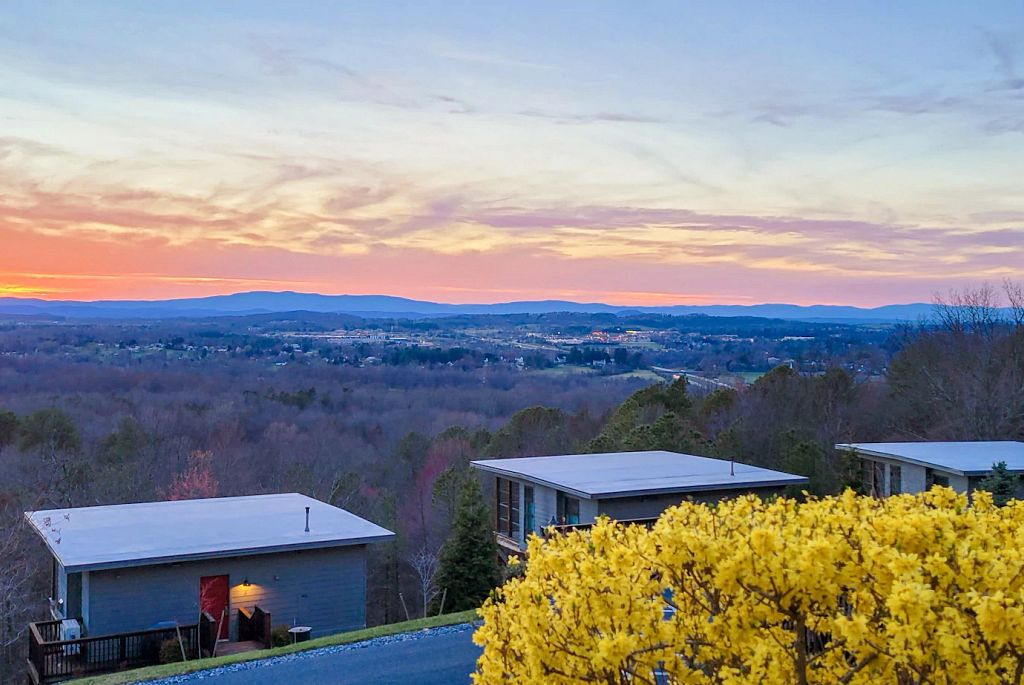 Have you visited Waynesboro before? Tell us in the comments.

TARYN WHITE IS A travel writer AND FOUNDER OF THE TRIP WISH LIST. HAVING VISITED ALL 50 US STATES AND MORE THAN 75 COUNTRIES, SHE SEES TRAVEL AS TRANSFORMATIVE AND HAS A PASSION FOR FAMILY, wellness, and THE OUTDOORS. TO SEE MORE OF HER INCREDIBLE JOURNEYS, FOLLOW HER ON INSTAGRAM!