Historic Garden Week in Virginia, known as “America’s Largest Open House,” takes place from April 23-30, 2022, offering 32 tours of impressive gardens from the foothills of the Shenandoah Valley to the beaches of Tidewater.

“Gardens are symbols of hope and renewal. This spring in particular, people are ready to seek inspiration from gardens and spend more time outdoors,” says Missy Buckingham, president of the Garden Club of Virginia (GCV), which organizes Historic Garden Week with its 48 member clubs.

“We expect tours to sell out early, so don’t wait until the last minute to buy tickets,” advises Andrea Butler, GCV’s executive director.

Need some ideas for which Historic Garden Week events to check out? We’ve highlighted a few of the top attractions for this annual spring extravaganza below.

Eyre Hall on the Eastern Shore 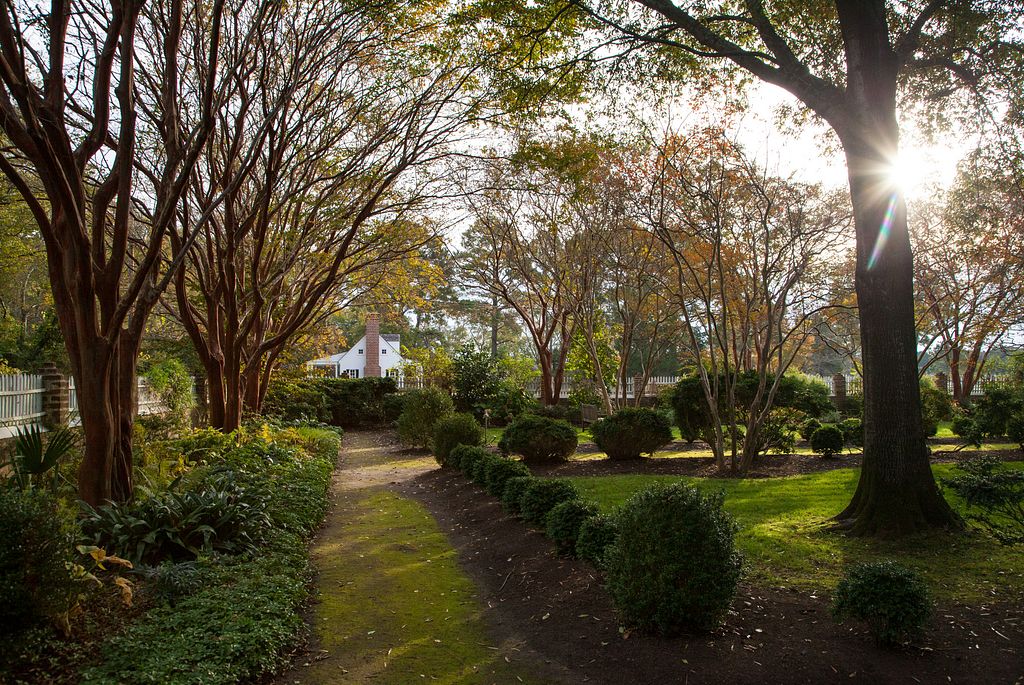 The gardens at Eyre Hall were created at the turn of the 18th century by John Eyre and his wife Ann. He enclosed his two-acre garden with a brick and picket wall and developed extensive paths and parterres where all manner of entertainment and plantation activities took place. The current owner and eighth generation of the Eyre family to reside at Eyre Hall continues the extraordinary tradition of stewardship that began with his forefathers over 250 years ago. The gardens retain their historical significance while delighting present-day visitors with the addition of colorful and contemporary mixed borders. Beyond the house and gardens, broad stretches of open fields and long views over Cherrystone Creek complete the placid panorama awaiting visitors to this National Historic Landmark and perennial centerpiece of the Eastern Shore tour.  This year marks the 81st anniversary of Eyre Hall’s participation in Historic Garden Week. 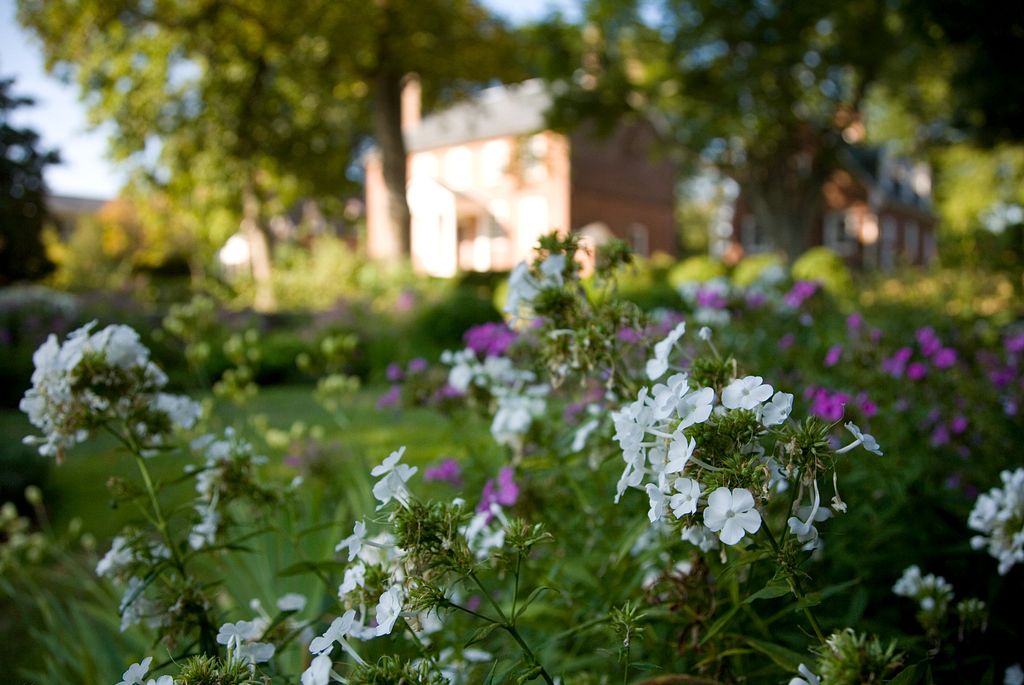 This self-guided tour takes place within a 12-block radius in downtown Fredericksburg. In addition, three gardens at historic places near the tour area will be open for touring. The gardens at Historic Kenmore Plantation & Gardens, the Mary Washington House and the Mary Washington Monument were restored by the Garden Club of Virginia with funds raised by Historic Garden Week. Kenmore was the first restoration project using funds raised from the first tours in 1929. 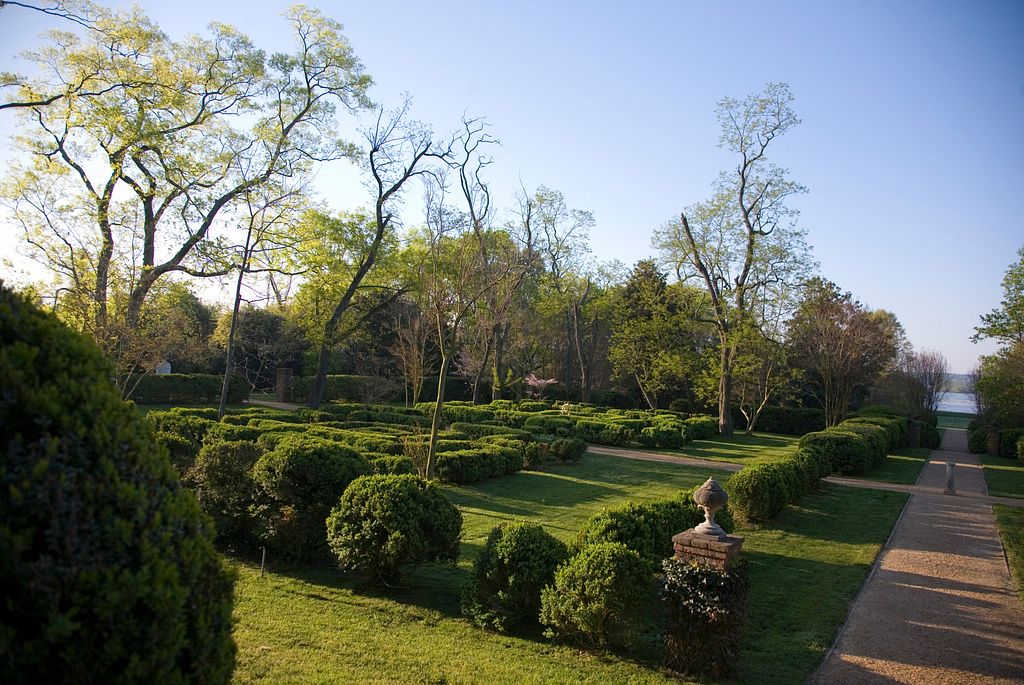 Open together, three historic properties and a church established in the early 1600s celebrate Historic Garden Week on three consecutive days. A special combo ticket allows access to the extensive grounds, gardens, numerous outbuildings and first floor interiors of all sites. In addition to touring, Westover Episcopal Church is offering lunch. All are located between scenic Route 5 and the James River in Charles City, a county with an expansive history over its 400 years, including the indigenous, the indentured, the enslaved, early European settlers, and generations of their descendants.

Berkeley Plantation’s Georgian mansion, built in 1726 of brick fired on the plantation, occupies a beautifully landscaped hilltop site overlooking the historic James River. The estate is the birthplace of Benjamin Harrison V, signer of the Declaration of Independence and governor of Virginia. It is also the birthplace of William Henry Harrison, ninth United States president and ancestral home of his grandson, Benjamin Harrison, the twenty-third president. Berkeley’s gardens and lawn extend for a full quarter mile from the front door of the mansion to the riverbanks. Many 100-year-old trees grace the restored boxwood gardens offering breathtaking vistas of the James River.

Shirley Plantation stands as a testament to Colonial life and early American history of the indigenous, settlers, indentured and the enslaved. Established only six years after John Smith’s settlement at Jamestown in 1607, Shirley Plantation is the oldest family-owned business in North America, dating to 1638. The “Great House” is largely in its original state and home to the 11th and 12th generations of the Charles Hill Carter family, the current stewards of the property. The grounds at Shirley contain eight original outbuildings with exhibits, including a video focusing on the history of enslavement and those who were enslaved at Shirley. Notable landscape features consist of an oak tree alley entrance, sweeping pastoral views, boxwood gardens, vegetable and herb beds, native sun garden, grape arbor, stately trees, and commanding views of the James River. 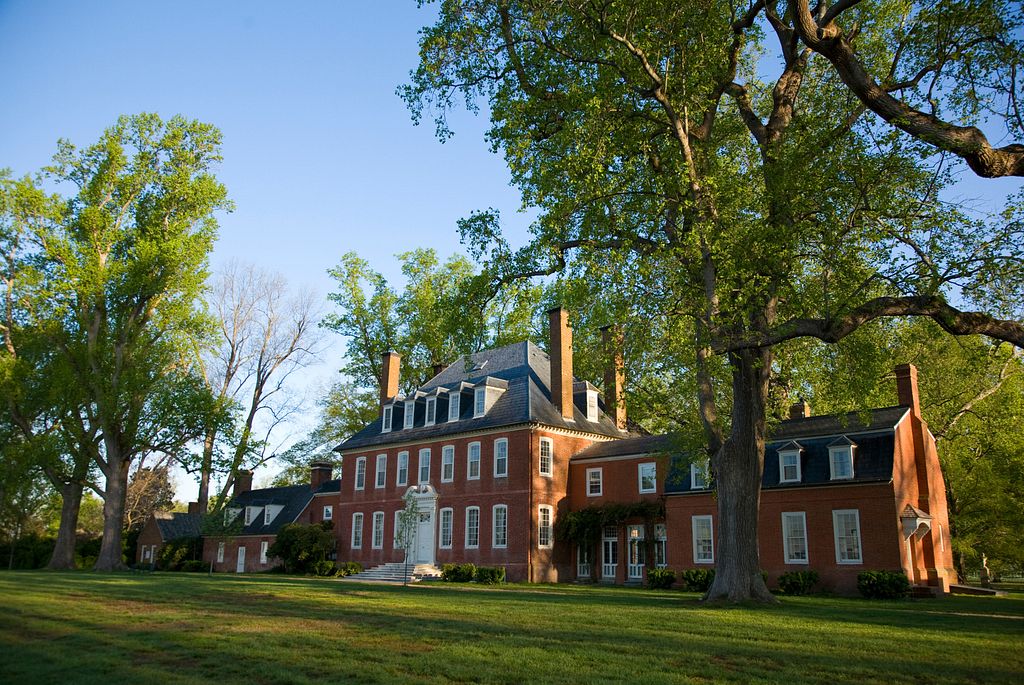 A premier example of Georgian architecture in America, Westover Plantation’s charm lies in its elegant yet extremely simple form and perfect proportions, best viewed from the edge of the front lawn. Westover’s grounds include a large formal garden arranged around William Byrd II’s marble tomb, a rare iron clairvoyee punctuated by columns capped with icons of virtue, outbuildings such as a five-hole privy, escape tunnel and icehouse, and three English wrought-iron gates, among the finest from the 18th-century in this country.

The Historic Gardens of Lynchburg 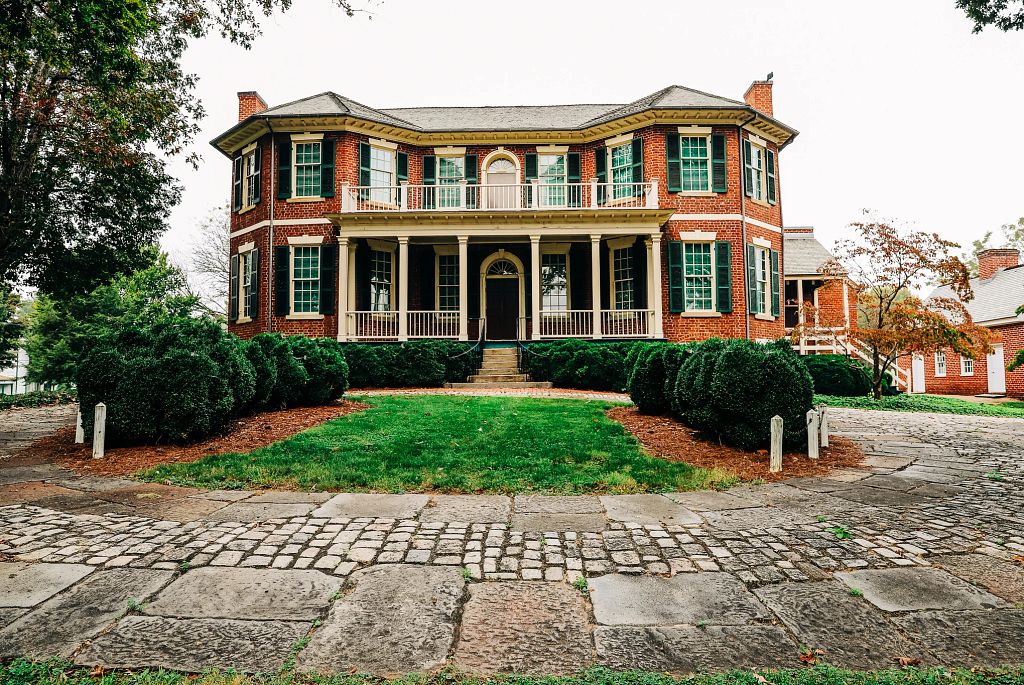 Situated among classical gardens and terraces, an English Country estate in Lynchburg harmoniously balances stately architecture, refined design and the function of a working farm. There are bees and chickens, along with a large greenhouse, as well as kitchen, vegetable and floral cutting gardens. Tour goers will enjoy four private properties, three of which are being featured for the first time.

Another property showcases the homeowners’ commitment to sustainability and biodiversity. Pesticide and herbicide-free for over a decade, they actively continue to reduce areas of manicured lawn to support pollinators and wildlife. Garden beds include a mix of old and new varieties of favorite ornamentals, in addition to numerous native species. This attractive blend of established architectural and landscape design with 21st century, ecologically responsible, garden practices is sure to inspire. 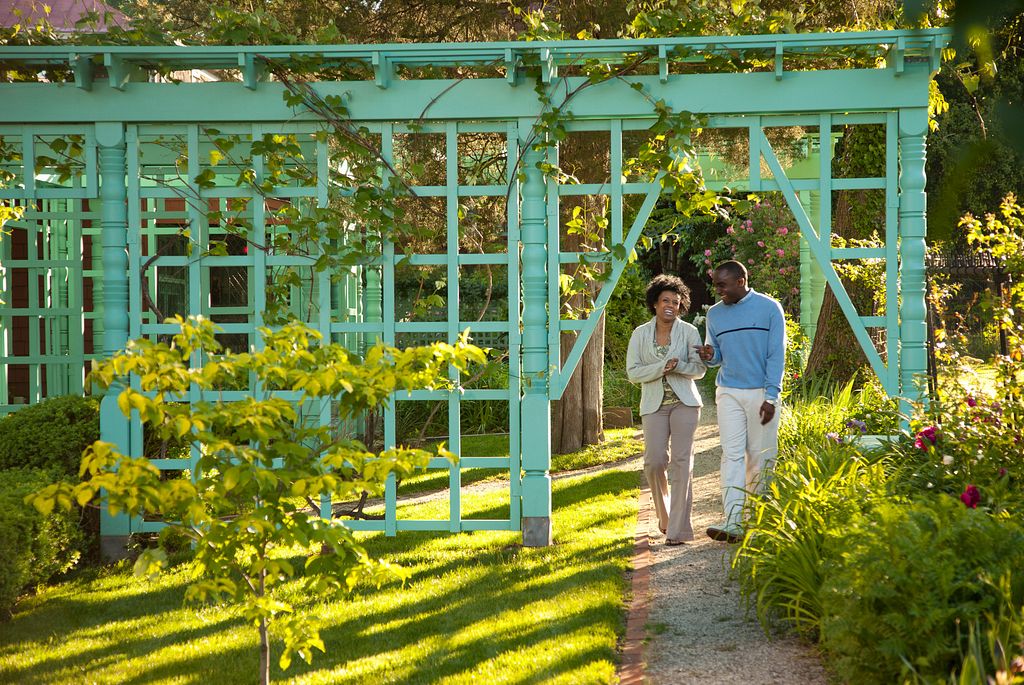 Nearby sites offering free admission to Lynchburg ticket holders include the Anne Spencer House and Garden. This Queen Anne-style house, which is on the  National Register of Historic Places , was the home of noted Harlem Renaissance poet Anne Spencer (1889-1975). Her garden cottage, “Edankraal,” was a personal retreat and a source of inspiration for many of her poems. 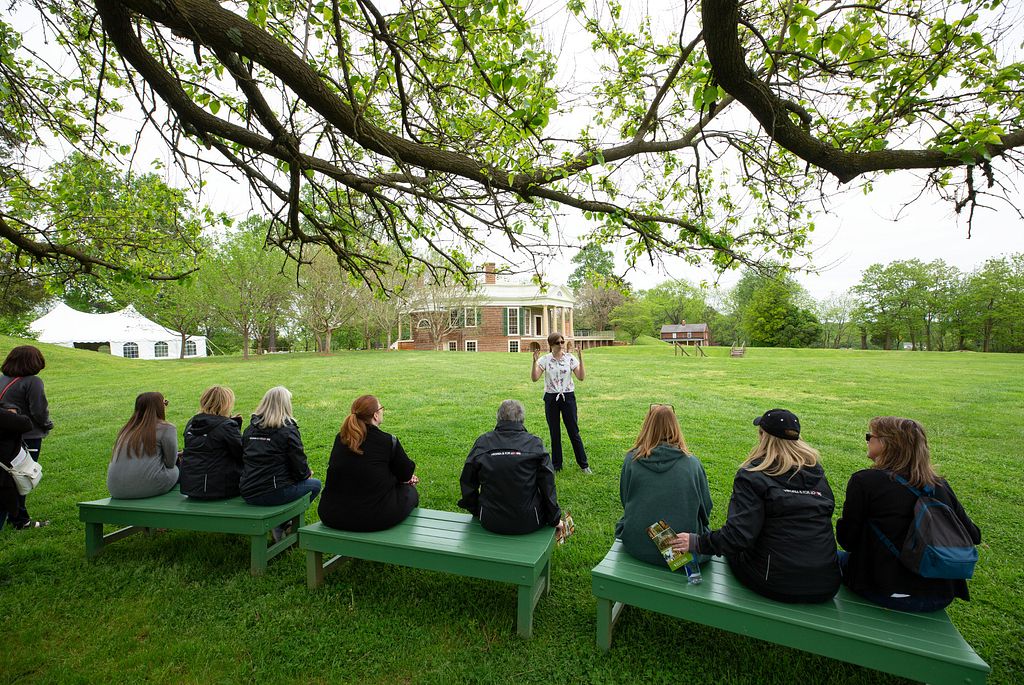 Lynchburg Garden Club of Virginia restoration sites that have benefitted from proceeds from prior Historic Garden Week tours are also waiving admission to tour ticket-holders. Thomas Jefferson’s private retreat and plantation at Poplar Forest provided him with the perfect setting to pursue his passion for reading, writing, and gardening after retiring from public life in 1809. Free admission is to the garden only. The 19th century Boxwood Garden and Daisy’s Garden at Sweet Briar College are located 12 miles north and also open for touring.

This garden-only tour includes eight private outdoor spaces. Visitors will walk through the ornate iron gate of a c. 1905 farmhouse and discover a feast for the eyes, and the tastebuds, with dozens of native cultivars and plants to attract pollinators at one featured garden. While it appears to be well-established and years in the making, the owner is a master gardener who recently transplanted the extensive collection from her previous garden. Raspberries, strawberries and blackberries mingle with old-fashioned daphne, lilacs and primroses. 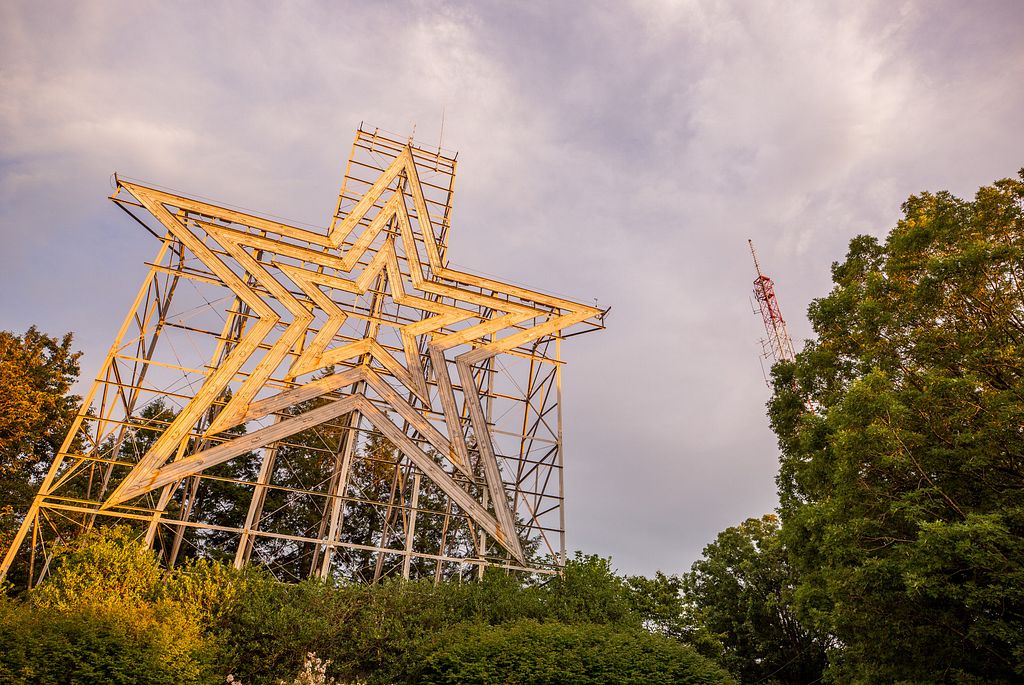 Stone steps flanked with large oakleaf hydrangeas and skimmia japonica shrubs lead down into another garden that offers sweeping views of the city and mountains to the north. While the front of the property faces up towards the Mill Mountain Star, behind the house the lawn opens to a spacious backyard surrounded by mature oaks, dogwoods, maples and majestic evergreens. Cherry laurels, hostas, hellebores, ferns and nine varieties of hydrangeas bloom in this full-sun garden.

Fifty years ago, the members of the Mill Mountain Garden Club (MMGC) conceived of a plan to adorn the two acres of paths leading to Mill Mountain Zoo with a native wildflower garden. Today, the latest generation of MMGC members have undertaken the restoration of this community gift by reimagining the trail system, restoring the large pond and waterfall, removing the invasive, non-native species of plants that threaten to take over, and planting an infusion of native trees and plants. Visitors will appreciate the many plantings of daffodils, snowdrops and fragrant lily of the valley as they stroll through the newly designed ADA Compliant pathways. Lush with rhododendron and dogwood, garden club members hope this woodland garden will inspire horticultural education, conservation and an appreciation of the plants native to this beautiful part of Virginia.

The Gardens of Colonial Williamsburg 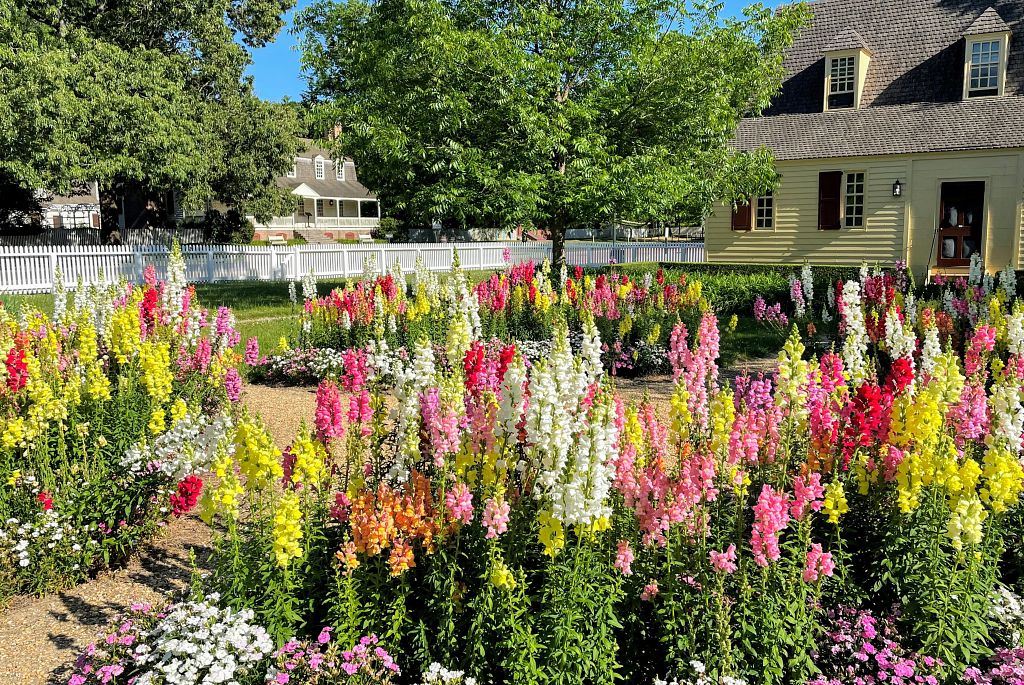 Spend the day walking through rarely opened gardens in Colonial Williamsburg. Ticket includes admission to seven sites. One small pleasure garden includes a brick path that crisscrosses four parterres planted with ferns and small springtime bulbs. The vertical scale of the garden is attained with flowering dogwoods and ancient crepe myrtles. Large, shoulder-high oakleaf hydrangeas encircle the charming space. A kitchen garden is positioned behind the pleasure garden and features period vegetables and herbs in an early version of “companion planting.”

Another small jewel of a garden was originally land owned by David Morton, a tailor, who purchased the property on this corner lot in 1777. The design was adapted from a 19th century garden in Charleston, South Carolina and features a well and a pump house as the central focal points. The muscadine grape vine arbor makes a dramatic backdrop to the overall garden scheme and is part of Colonial Williamsburg’s Arboretum collection.

As the Garden Club of Virginia’s largest fundraiser, Historic Garden Week proceeds underwrite the ongoing restoration and preservation of Virginia’s historic public gardens and landscapes, as well as a research fellowship program for students in landscape architecture. To comply with COVID-19 mandates, the Garden Club of Virginia reduced the number of tour tickets available for sale, decreased ticket prices and implemented a timed-entry format. For more information and to purchase tickets, visit www.vagardenweek.org.