There’s just something magical about gathering up your crew around a glowing campfire, getting tucked into sleeping bags under the stars and leaving your cares behind on a camping adventure in Virginia. Shenandoah National Park is just the place to go too, thanks in large part to four well-spaced family campgrounds along Skyline Drive.

All four campgrounds operate from spring to fall. Some spots can book up to six months in advance. However, the majority of sites are only available on a first-come, first-serve basis. As they say, the early bird gets the worm and that’s especially true at Shenandoah National Park. 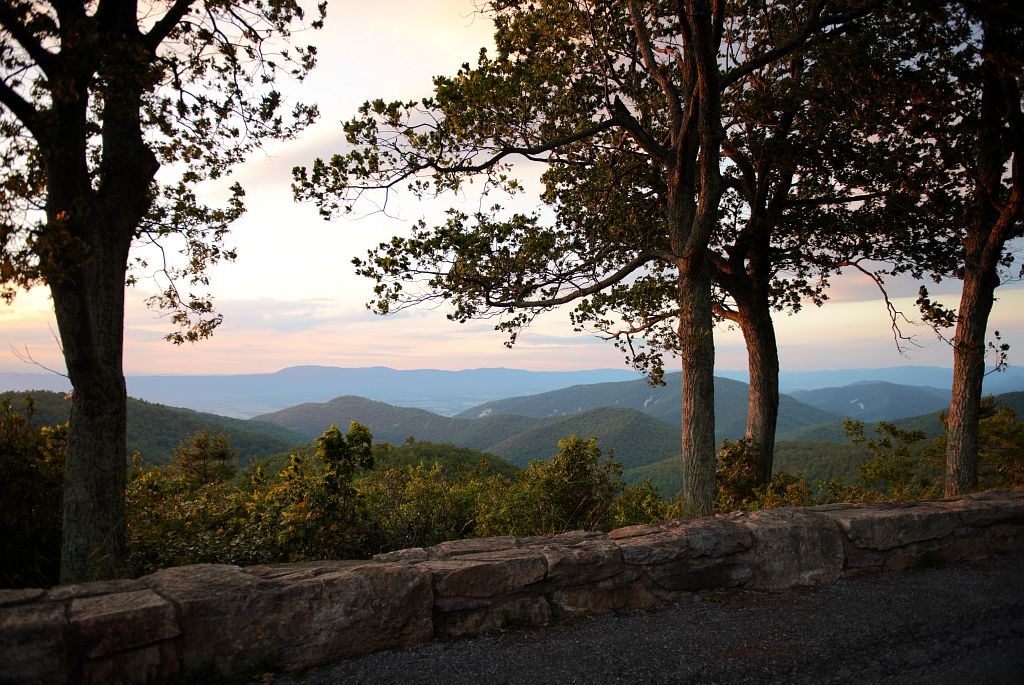 For large groups (up to 20 people), Dundo Group Campground can be reserved up to one-year in advance. There is backcountry camping, too. To catch some zzz’s out in the wild, you’ll need a free permit, but it’s a cinch to get one on the park’s website.

Every campground at Shenandoah National Park has its own appeal. For example, Lewis Mountain is small and intimate, while Big Meadows is large and packed with amenities, like a large picnic area and one of the park’s two visitor centers.

All of the campgrounds allow visitors to experience nature, including black bears, which are known to wander across each of the campgrounds from time to time. That noted, store your food (anything with a scent really, even toothpaste) in an on-site storage canister or in your vehicle to keep the bears from patrolling the campground.

For a look at each of the four family campgrounds at Shenandoah National Park, read on to choose the best one for you and your squad as you plan out your first or next national park camping adventure.

Mathews Arm is the northernmost campground in the park, located on the west side of Skyline Drive at milepost 22.1. This campground is open from May to October and is a snap to reach from both the Front Royal and Thornton Gap entrances.

There are 166 sites, including 47 sites that can be reserved online at Recreation.gov. The remaining sites are first-come, first-serve. All individual sites are $15 per night and are open to both tents and RVs. There are three group campsites for up to 25 people at a rate of $50 per night. All campsites are non-electric with no hook-ups.

Mathews Arm is clean and quiet, but also more primitive than the other park campgrounds. As in, there are no showers at Mathews Arm. You will, however, find flush toilets and running water (cold only). The closest showers are coin-operated and are located at Big Meadows Campground at milepost 51.2.

Several family-friendly hiking trails are accessible from Matthews Arm, including the Tuscarora-Overall Run Trail, which leads to Overall Run Falls. At 93-feet-tall, this is the tallest waterfall at Shenandoah National Park. It’s a real must-see.

The Traces Trail can also be reached from Mathews Arm. This easy-going nature trail casually loops around the wooded campground. This leisurely path makes for a pleasant after-dinner walk with the kids or your pup.

The closest visitor center is the Dickey Ridge Visitor Center at milepost 4.7. This is a stone’s throw from the Front Royal entrance. Here you can check into ranger-led programs, pick up a Junior Ranger activity booklet or walk across Skyline Drive for an easy one-mile loop hike on the Fox Hollow Trail (no dogs allowed on this trail).

Situated in the Central District of Shenandoah National Park at milepost 51.2, Big Meadows is open from late-March to early-November. This campground is just north of the Swift Run Gap entrance. It’s also the largest campground in the park.

There are 221 sites, including 168 sites that can be reserved online at Recreation.gov. The remaining sites are first-come, first-serve. Big Meadows has 51 tent-only sites. All individual RV and tent sites are $20 per night. Two group campsites allow up to 15 people at a rate of $45 per night. All campsites are non-electric with no hook-ups.

Big Meadows is super-close to many of the park’s most popular spots, like Hawksbill Summit and Bearfence Mountain. The campground is also an easy-breezy walk to a large picnic area, as well as full-service Big Meadows Lodge.

Ideal for first-timers, this campground is rich with amenities, including showers. Yes, there are hot showers at Big Meadows, but plan to bring coins or small bills. For a five-minute shower, it costs $1.75. There is a change machine by the showers. You’ll also find coin-operated laundry facilities, ice and firewood on-site at Big Meadows.

An amphitheater is located in the northwest corner of the campground for seasonal ranger-led programs. To the left of the amphitheater is the trailhead for the leafy hike to 81-foot-tall Lewis Falls, the fourth largest waterfall in the park.

In addition to Lewis Falls, there are two other waterfall hikes close to the campground, including Dark Hollow Falls (milepost 50.7) and Rose River Falls (milepost 49.5). The latter absolutely wows with a dreamy swimming hole. 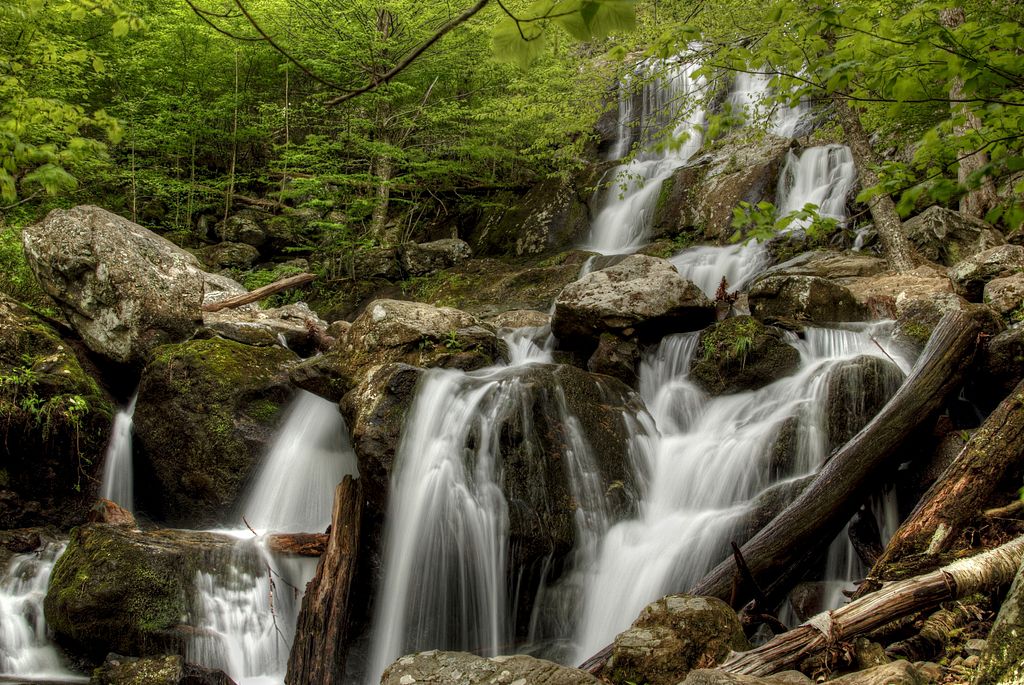 The kid-friendly Story of the Forest Trail also sets off from Big Meadows. This flat path is tops for a casual stroll, but keep in mind that pets are not allowed on this trail. Your furry pals are also prohibited on the Dark Hollow Falls Trail.

Beyond hiking, Skyland Stables is located just off Skyline Drive at milepost 42.5. Book a one-hour or 2.5-hour guided horseback trail ride to see the Shenandoah Valley from a new perspective. As in, from atop a horse as you trot across an old apple orchard along verdant trails. Hand-guided pony rides are available for small children.

For a sit-down meal, Spottswood Dining Room is located inside Big Meadows Lodge. Savor delicious menu items, like the New Deal Roast Turkey Plate. Save room for a generous slice of Blackberry Ice Cream Pie. In the New Market Taproom, order up a craft cocktail or glass of local wine to celebrate your day in the park.

An easy six-mile drive south of Big Meadows sits Lewis Mountain Campground at milepost 57.5. With just 30 first-come, first-serve sites, this is the smallest campground at Shenandoah National Park. Lewis Mountain is closest to the Swift Run Gap entrance and is open from late-March to October.

All individual RV and tent sites are $15 per night. There are no group campsites. All campsites are non-electric with no hook-ups. Lewis Mountain also has 15 mountain cabins available for rent from mid-June to late-November.

You’ll find climate-controlled one- and two-bedroom cabins with bathrooms, but no wi-fi, as well as more rustic cabins with no bathrooms or running water. Pet-friendly cabins are available too. A nightly fee applies for each well-mannered furry pal.

Lewis Mountain is a prime pick for those eager for a quiet, more intimate camping experience, as well as on-site amenities, like an ice machine, coin-operated laundry and showers. An on-site camp store sells basics like firewood, snacks and supplies.

A picnic area is on the north side of the campground, adjacent to Skyline Drive. Away from the main park road, the campground feels refreshingly remote. Yet, Lewis Mountain is mere steps from the white-blazed Appalachian Trail, which runs south-to-north along the east side of this small campground.

Loft Mountain Campground sits squarely atop Big Flat Mountain in the South District of Shenandoah National Park. Open from early-May through November, this campground is closest to the Rockfish Gap entrance.

There are 207 sites, including 55 sites that can be reserved online at Recreation.gov. All other sites are first-come, first-serve. Loft Mountain has 50 tent-only sites. All individual RV and tent sites are $15 per night. Campsites are non-electric with no hook-ups.

You may even find cell service. Another plus for first-time campers. It’s not a guarantee, but you’re more likely to be able to place a call or send a text from the park’s South District, including at the campground and adjacent hiking trails.

Given the campground’s location, there are many points to enjoy a colorful sunrise or sunset, including along the Appalachian Trail, which encircles the campground. However, it’s worth noting that the most sought-after sites, with the most spectacular views, are only available first-come, first-serve. Plan to arrive early for your stay.

There are several nearby hikes of note, including the Loft Mountain Loop by way of the Frazier Discovery Trail and Appalachian Trail. This easy two-mile hike sets off across Skyline Drive from Loft Mountain Wayside and wows with far-reaching vistas. On the loop’s north side, an overlook overwhelms with east-facing sunrise views. 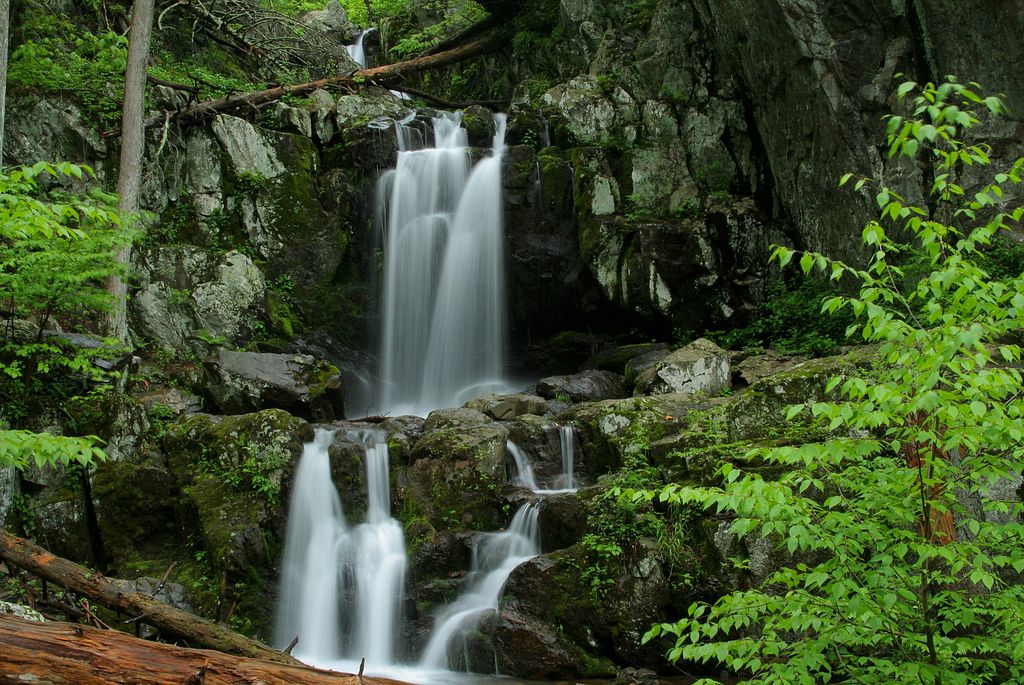 Another must-do hike sets off along the Appalachian Trail and connects with the Doyles River Trail to reach Doyles River Falls, which has several enticing swimming holes. The easy Blackrock Summit is also quite popular and begins just south along Skyline Drive at milepost 84.4. This one is an absolute must-do while in the park.

A stone’s throw from Loft Mountain in the South District of Shenandoah National Park is Dundo Group Campground. Open from May to November, this campground is closest to the Rockfish Gap entrance.

There are three group camping sites. Each non-electric site can accommodate up to 20 people. Sites can be booked online at Recreation.gov up to one-year in advance at a rate of $45 per night. All check-ins take place up the road at Loft Mountain.

This is a more primitive campground. There are picnic tables, water spigots and restrooms, but now showers or camp store. For sundries, the closest camp store is Loft Mountain Wayside at milepost 79.5. 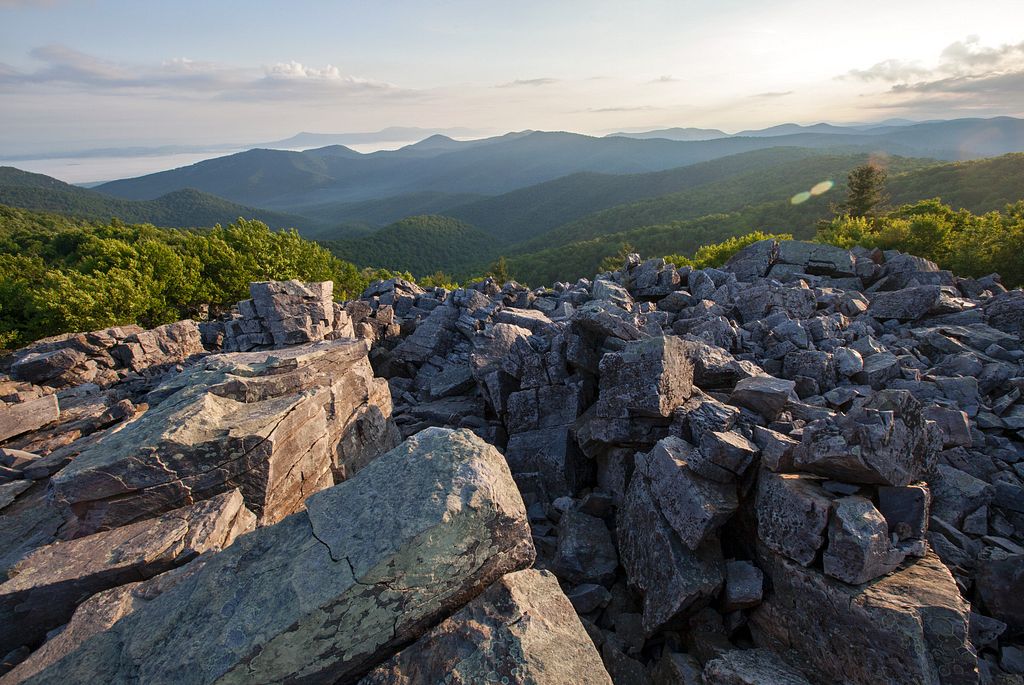 Backcountry camping is also an option within the park with a free backcountry permit. Request a permit online to print out or reserve one in advance to pick up inside the park at a self-serve kiosk at various locations across Shenandoah National Park, including all four entrance stations and Loft Mountain Wayside.